You are here: Home / Archives for Wine Country Photography Stag’s Leap – the craggy portion of the mountain

Legend of Stag’s Leap and the land of Cabernet Sauvignon

Stag’s Leap Wine Cellars is the more famous and well known because of its historic Cabernet victory in the 1976 Judgement of Paris. Warren Winiarski is one of Napa Valley’s legendary winemakers. His 1973 Stag’s Leap Cabernet Sauvignon was rated the top wine at the Judgement of Paris, besting a list that included Grand Cru Bordeaux wines. The results shocked the wine world and brought fame and fortune to the Napa Valley.

In 2007, Warren sold his winery to the Ste. Michelle Wine Estates in the state of Washington and the Antinori Family of Italy.  In 2014, Stag’s Leap Cellars opened a beautiful visitor center and  tasting room facing the mountains and the vineyards below it. It is a dramatic and inspiring view of one of nature’s great works of art.  The Stag’s Leap Cellars tasting room is open daily from 10 to 4:30.  Check the Stag’s Leap Wine Cellars Website for tasting and touring choices.

Take a ride along the Silverado Trail, where it begins at Trancas Street and head to the north. The first AVA is Oak Knoll. Oak Knoll gives way to the Stags Leap District AVA. The area is famous for Cabernet Sauvignon. The names of Shafer Vineyards, Pine Ridge, Clos du Val, and Odette Estate are all synonymous with high-quality AVA. See all the wineries in the Stags Leap District AVA. 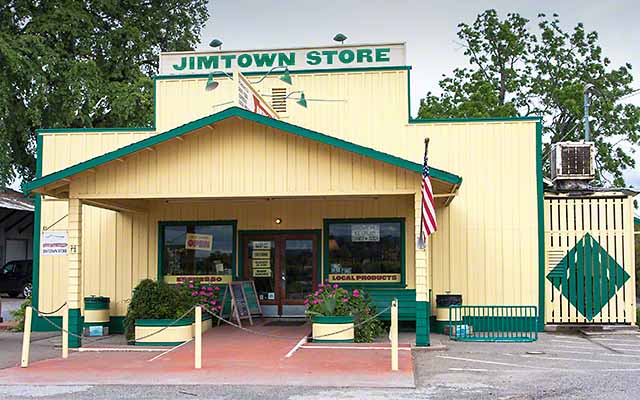 A wine country getaway to Sonoma County and Healdsburg would not be complete without a stop at the funky Jimtown Store in the Alexander Valley on Highway 128. It is one of the most popular places for stocking up a deli lunch and picnic supplies. Carrie Brown and her late husband John Werner purchased the historic Jimtown Store many years ago and turned it into a landmark destination.

Whenever we are in Healdsburg, we always make a stop at the Jimtown Store for our picnic lunch. We enjoy perusing the store and never mind waiting while the staff prepares our order. One of our greatest life pleasures is to picnic and sip wine among the vineyards. The Alexander Valley is one of the most beautiful settings in any wine country in any part of the world. Traveling along Highway 128 are many options for wine tasting and picnicking. Most of the wineries along this route have picnic facilities. The tasting rooms, for the most part, are low key, casual, and fun.

To get to the JImtown Store from Healdsburg head north on Healdsburg Avenue and make a right turn onto Highway 128. Within a few miles, you will come to the Jimtown Store. Here is a link to the Carrie Brown’s Jimtown Cookbook featuring the delightful concoctions available at the Jimtown Store.

More information on the Alexander Valley and Jimtown Store 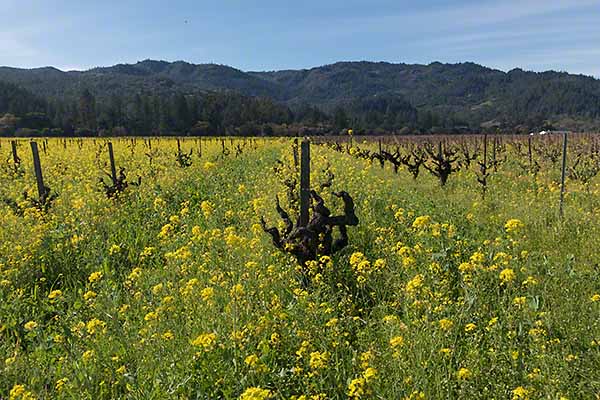 Old Vines and Wild Mustard in the Napa Valley

Here we are in an old vine vineyard in the St. Helena AVA. It’s February and temperatures are in the mid 70’s. The wild mustard looks radiant, surrounding the old vine. The vineyard is not marked, but the old vine is either Zinfandel or Cabernet Sauvignon. Although we have little rainfall, the wild mustard in the Napa Valley is one of the best seasons in recent memory. Take a ride to the Napa Valley and experience one of nature’s delights. 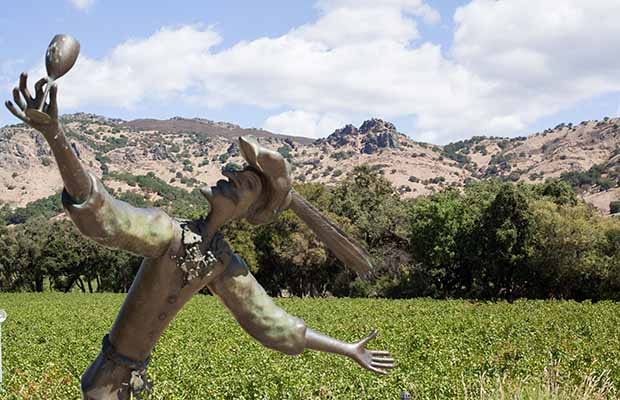 On the Silverado Trail is the very popular Stag’s Leap Wine Cellars. The Greeter sits just in front of the Stag’s Leap mountain peak and offers a cheer as visitors and tourists make their way from the parking lot to the tasting room and hospitality center. 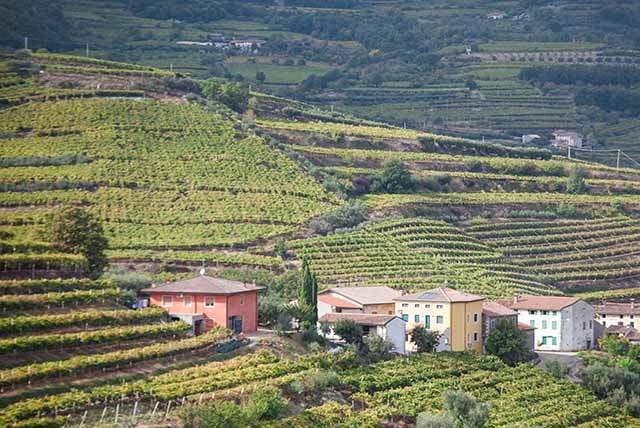 Many moons ago, Soave wine exported to the United States was considered to be “Jug Wine.” This is no longer the case, with Soave white wine crisp and fresh, and very enjoyable. Wine country travelers to Italy hardly venture into Soave wine country. It is not as famous as Tuscany (Chianti) or Piedmonte. However, it is beautiful wine country with many less tourist. The above photo was shot along a hillside area of Soave. The vineyards you see in the photo are likely to be Garganega. It is the main grape of Soave. The town of Soave is an exciting attraction with loads of good restaurants and places to taste Soave wine. More on Soave wine country. 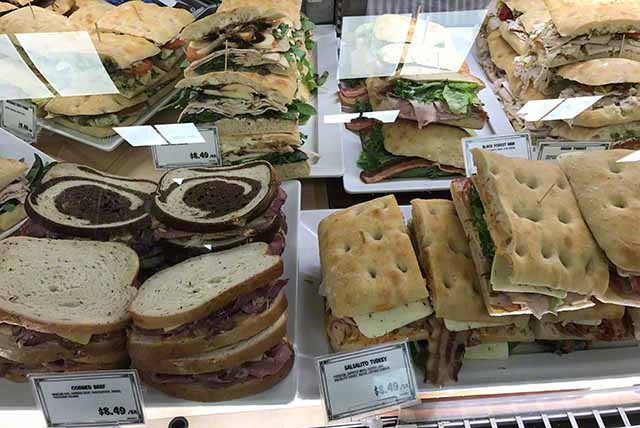 Glen Ellen is one of many excellent wine country towns in Northern California. It is small, quaint, plus the home of Jack London. Glen Ellen also has a fabulous market. It is the Glen Ellen Village Market. It is the place to get a morning cup of coffee, a pastry, or donut. It also has just about the best deli counter anywhere in all of wine country. If you do not want to opt for a deli sandwich, try their fantastic salad bar. Once loaded with your picnic basket head to one of the many nearby wineries that have picnic areas. We chose the Imagery Estate Winery. If you have a group of friends, you can book a picnic table at Imagery for $50. That includes a bottle of wine. Imagery also has a Bocce court.

More on Glen Ellen and the Sonoma Valley 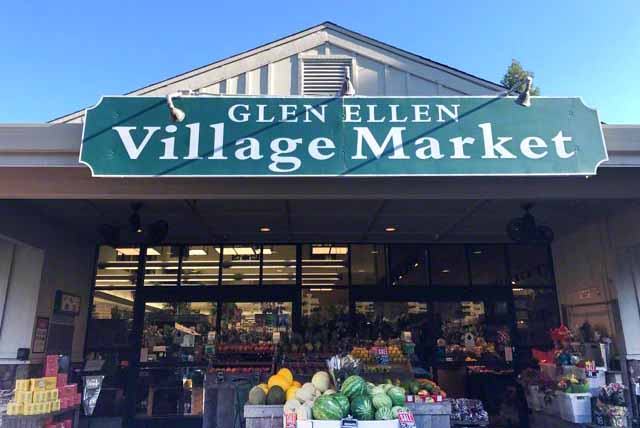 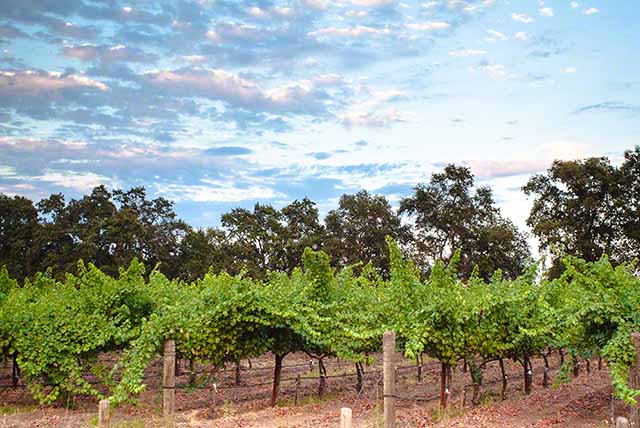 For our Wine Country Photo of the Day, the focus is St. Helena Wine Country and its Wine Appellation or AVA. The town of St. Helena is one of the most popular wine country towns. There are many tasting rooms, restaurants, and boutique shopping along Main Street. There are many interesting things to do in St. Helena besides wine and food. Taste olive oil, visit the Culinary Institute, and visit art galleries. Close by wineries are Hall, Beringer Vineyards, Charles Krug, and Louis Martini. 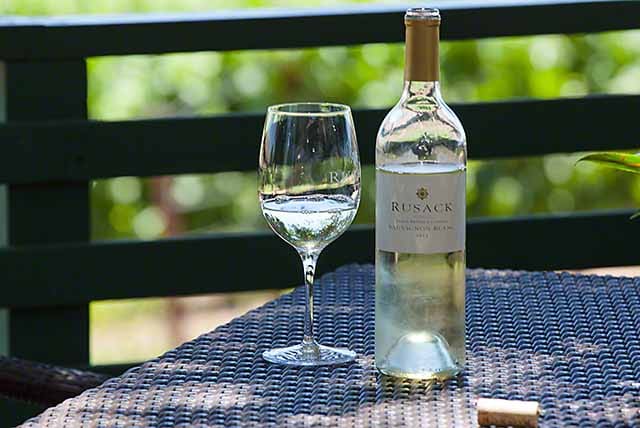 Picnic in the Vineyards

One of our favorite rituals on each of our wine country getaways is to have a picnic in the vineyards. We find it so relaxing and rejuvenating. The photo above was shot at Rusack Vineyards in Santa Barbara wine country. We throw our a picnic kit (backpack) in our trunk along with our cooler. Our picnic kit contains all the necessary equipment for enjoying a picnic lunch. That includes wine glasses, plates, tablecloths, and napkins. For each wine region on Wine Country Getaways, we list our favorite winery picnic areas and where to purchase your deli lunch. 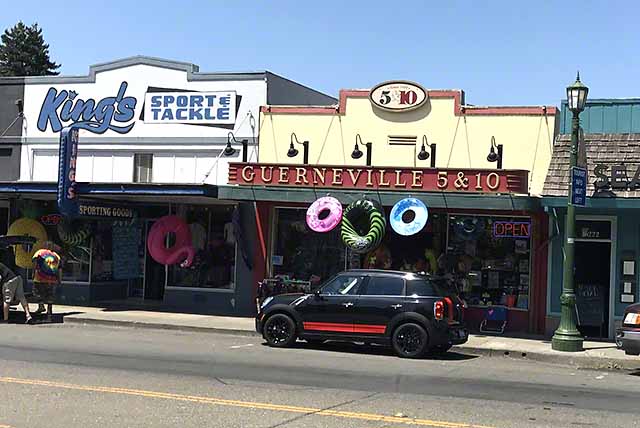 Hey, wine country travelers to Sonoma County and the Russian River wine region! You must visit the wine country town of Guerneville, CA on River Road. Show your kids and friends a town which has not changed since 1950 and beyond. King’s Sport & Tackle and the Guerneville 5 & 10 still stand strong. Take a walk down to Johnson’s Beach and view the famous Russian River which heads to the Pacific Ocean. Take a hike in Armstrong Grove Redwoods State Park and view the awesome Coastal Redwood Trees. On the way to Guerneville visit the Korbel winery established in 1882. Korbel is one of many exciting wineries to visit along the Westside and River Road Wine Trail. 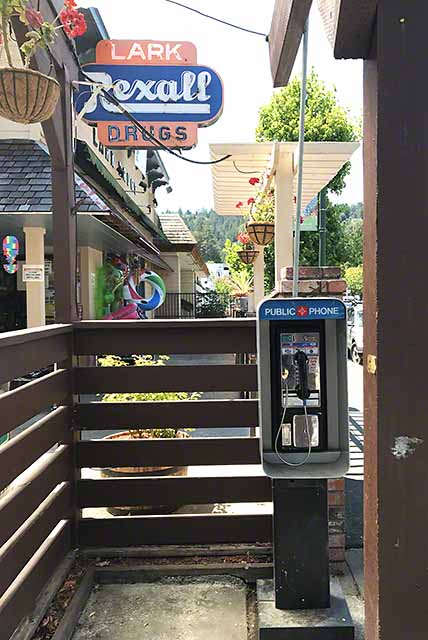 The old pay phone in Guerneville 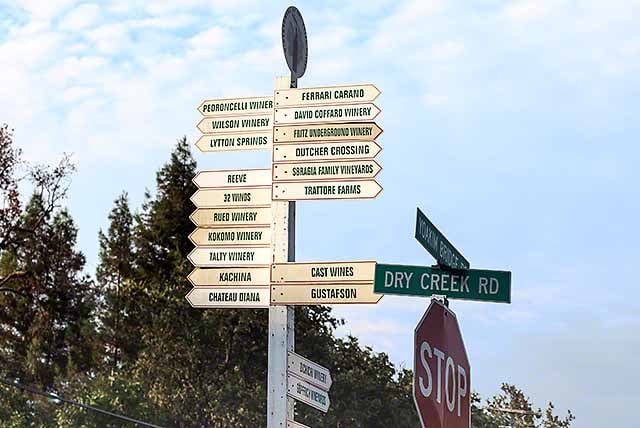 At the intersection of Dry Creek Road and Yoakim Bridge Road

The Dry Creek Valley AVA in Sonoma is one of the most densely populated wine regions with regard to vineyard acreage and number of wineries. There is a number of Zinfandel, Sauvignon Blanc, Sirah, Chardonnay Vineyards. Most of the wineries are small and family-owned. As you can see from the roadside directions, one can visit many wineries on Dry Creek Road. Make the wine country town of Healdsburg your dining and lodging destination. Take two days to visit wineries in Dry Creek. Don’t forget about a picnic lunch at one of the wineries. Most Dry Creek wineries have picnic areas with excellent vineyard views.