You are here: Home / Archives for Bocce 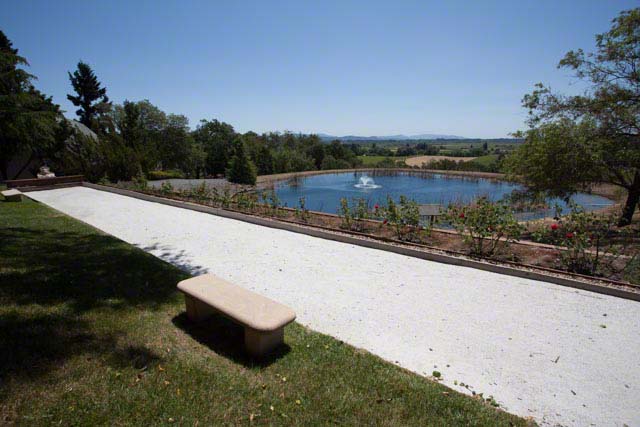 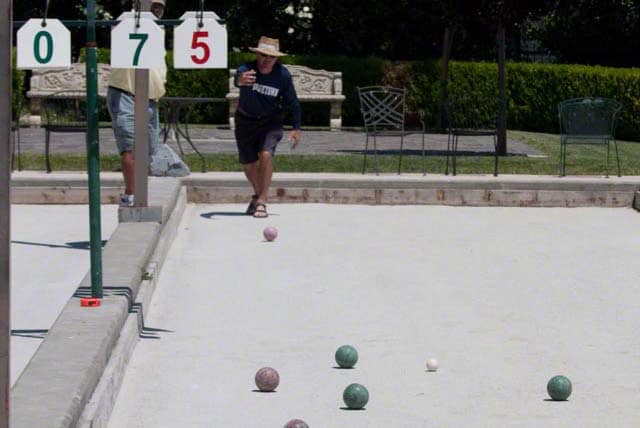 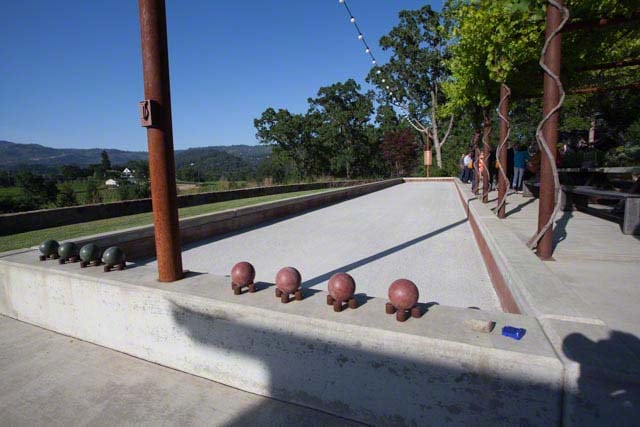 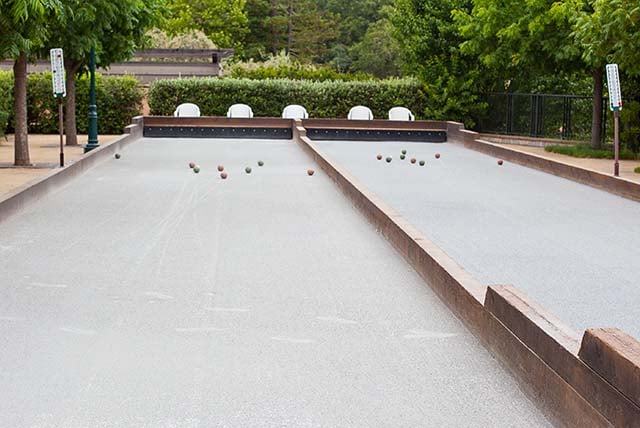 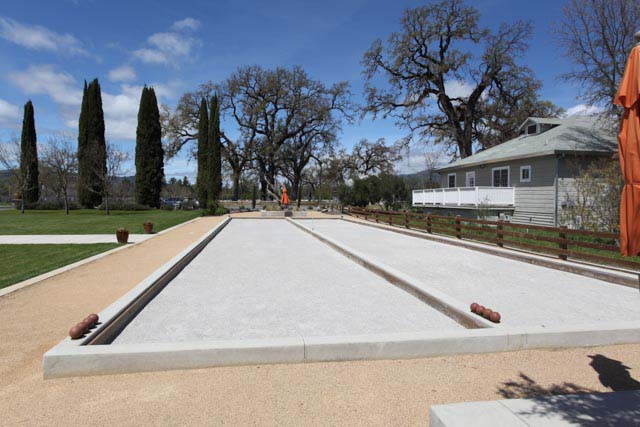 May is Bocce Time in Wine Country

May is the perfect weather month, and that’s why we have declared May as Bocce Month in wine country. Bocce is a fun, competitive game that can easily be enjoyed by family and friends, the young and the old. You don’t need to be a great athlete to play this game at a fun level. If you can toss a ball underhand, you can be quite good at the game of Bocce. Bocce at wineries has become immensely popular in recent years. Many wineries in California have one or more Bocce courts on their estates. What can be more fun than to toss the ball and sit back with a glass of wine in hand and boast about your Bocce prowess? Each May we gather a group of our friends and head to the Francis Ford Coppola Winery in Geyserville. The winery is just north of the wine country town of Healdsburg, off Highway 101. Francis Ford Coppola has four professional style Bocce Courts. We spend the entire day playing Bocce and break for lunch on the Coppola terrace. We have a catered lunch from the winery’s Rustic Cafe. We crown a champion at the end of the day and then head off to an excellent dinner of wine and food. It is a time to brag about your plays of the day and poke fun at others who played badly. Get yourself and others to a wine country Bocce court and give this traditional Italian game a go. A friendly disagreement on the Bocce Court. Always bring a measuring tape.

How to plan a wine country Bocce party

As we swing into the tourist season in wine country and you plan your next wine country getaway with your friends, think about playing a game or two of Bocce at a winery. This is exactly what we have done once a year for the past ten years. There are several wineries that have one or more Bocce courts for visitors. We have played with our group at Larson Family Winery, Brutacao, and Francis Ford Coppola. Here is a complete list of wineries in California wine regions that have at least one Bocce court.

This past week, we gathered our group of friends for an enjoyable and highly competitive all-day Bocce tournament at the Francis Ford Coppola winery. They have four beautiful Bocce Courts and we used three for the tournament. We reserved the courts well in advance for a weekday and arranged for Coppola’s Rustic Restaurant to serve us a buffet lunch of sandwiches and salads on the lovely winery terrace.

We had seven couples play in the Bocce tournament. The great thing about Bocce is that, at this level, everyone has a chance to win. We do a complete round robin tournament, meaning each team plays all of the other teams at least once. We modify the rules a little to speed up the game. Here are some Bocce tips. Be sure to bring a tape measurer to settle any arguments about which ball is closer to the Pallino.

We plan other wine country activities around the tournament. The day before the Bocce games we meet at a winery for a tour, tasting and lunch. This time around we chose Truett-Hurst in the Dry Creek Valley. What a beautiful and peaceful spot to enjoy food and wine. Most of us stop at Big John’s Market in Healdsburg beforehand to order deli sandwiches or choose from the delicious items in their salad bar. More on the Truett Hurst Winery.

We booked rooms at the Geyserville Inn, which is very close to our Bocce venue at the Francis Ford Coppola winery. The inn has a beautiful outdoor area and we meet there for wine and appetizers before heading off to dinner. Have you eaten at the Diavola Pizzeria and Salumeria in Geyserville? This Italian restaurant is a gem in the Sonoma wine country. The restaurant recently added a wonderful patio area and, when the weather is accommodating, it is a delightful place to dine. We arranged for a special menu and as you can see from the photo in slide show, Diavola treated us like VIP’s!

Costeaux French Bakery in Healdsburg is our “go-to” destination for breakfast on our final day. The bakery supplies a wide assortment of bread and pastries for many restaurants in Healdsburg and Santa Rosa. They also serve a fabulous full breakfast. Most of us then spend a couple of hours or more in Healdsburg. We think it is the best town in any wine country region in California. There is something there for all.

So let’s get going here on your first Bocce game. Start small, perhaps with two or three couples. Choose a winery with Bocce courts and head out for a fun and exciting time in wine county.

It was a perfect day for our 7th Annual WCG Bocce Tournament held in Geyserville at the Francis Ford Coppola winery on May 26th. With four new beautiful, professional Bocce courts, the gourmet Rustic Café, and spectacular views of the Alexander Valley, we could not have asked for a better venue. We make the Bocce event a two-night affair, this time lodging in Geyserville at the Geyserville Inn. The day before the tournament we visit a winery or two, have a picnic lunch, and have a nice dinner at a local restaurant. It was a very rainy morning the day we headed up to Geyserville. We were worried that the courts would be too wet to play our tournament the following day. But by 1 pm the rain had stopped and the sun had broken through the clouds. Our first stop was the Mauritson Winery where we had previously arranged to have a tour with assistant winemaker Emma Kudritzki, followed by a tasting of their newly-released Rockpile wines.  We’d brought our picnic lunches along and the Mauritson Winery was kind enough to set up tables for us inside the barrel room and spare us from the outside winter-like climate.

That evening we had a family-style dinner at Diavola Pizzeria & Salumeria in Geyserville. Chef Dino Bugica cooked up a beautiful array of pizzas and fresh pasta dishes and other delicious delights. What a fabulous meal and at such a reasonable price! Who would think that in tiny Geyserville you could find such a gourmet fare as this one? This place should be on Michael Bauer’s Top 100 Restaurants; it is that good.

Lunch at the Poolside Café

Now for the 7th Annual WCG Bocce Tournament. We had 8 teams of Bocce players and, with the four Bocce courts at Coppola, we were able to play a full round-robin schedule with each team playing seven games, a grand total of 56 games plus an added play-off game to decide the championship team.  These courts cannot be reserved, so we’d arrived when the winery opened and immediately started our tournament on all four courts. We played ferocious and spectacular Bocce until the tournament was completed at 4:30 pm. We did break for lunch at 1pm.  In advanced we’d ordered a lunch for us to be served buffet style at the poolside café. The food was wonderful and the setting on the patio by the pool is very peaceful and enjoyable.

One of the great things about Bocce, at least at our level of skill, is that the game is so

easy to play, anyone can win. The old sport clichés like “on any given day” or “that’s why they play the game” could not be truer with our tournament. Two of the teams that had fared poorly over the last few years battled down to the wire for first and second place. In the playoff situation, the Library Reserves bested the Winos.  Last year’s winner, the Zin Lovers, finished dead last.  Go figure!

The entire staff at the Francis Ford Coppola winery that attended to us must be congratulated. They were extremely helpful, courteous and very professional. The Staff at the Geyserville Inn was also very gracious in helping us plan our appetizer dinner the night of the tournament.  For a reasonable fee, you can rent their meeting/party room for your casual gathering.  The fee includes the use of tables and chairs, as well as a Barbecue kettle for your use.  We’d all brought appetizers from home and kept them

cold in the refrigerators in the rooms.  We enjoyed our relaxing evening rehashing the day’s activities and awarding the perpetual trophy to the Library Reserves. The trophy must be prominently displayed in their house and it is the WCG commissioner’s duty to make periodic inspections at the home of the Library Reserves to see if they are complying with this tradition.